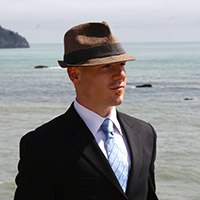 This all really began when I was about 12 years old, going to school at Jacoby Creek Elementary in Bayside, CA. My school had a program teaching kids about Hyper Text Markup Language (HTML) using Adobe Pagemill. Pagemill was considered extremely advanced for that time, but no one really knew how to use the technology properly. It was a lot of fun learning how the pieces fit together even without a guide to really know the way. This experience opened an important door which led me to the successful developer I am today.

I built a lot of websites in high school, and managed to earn some money on the side between that and fixing computers. Professionally, my carrer really started at Washington State University working in 2002 at the Distance Education Branch of the WSU Libraries as part of my work study grant . I had fairly broad discression in what I was supposed to be working on which allowed me the freedom to learn quite a bit and experiment with website programming. I spent several years here gaining experience, even eventually building my own simple content mangement system (CMS) for Professor Mike Alfaro's website at the Evolutionary Biology Department.

When I finally moved back to Arcata in 2007 I had the chance to work for a small development firm: JCS Marketing. They were working with a new Open Source content management system that had just showed up on the scene called Joomla. My experience developing my own CMS made me realize immediatly that Joomla was going to be a hit. Now, over 6 years later and with 150+ websites built I've become a master guru of all things Joomla. T

Trevor is an expert in his craft, he is patient and candid, and I recommend him every chance I get.

We run a boutique design agency and pride ourselves on the high-quality of our work, so when we were looking for a new developer, we did not take it lightly...

This email address is being protected from spambots. You need JavaScript enabled to view it. - 707-206-7563